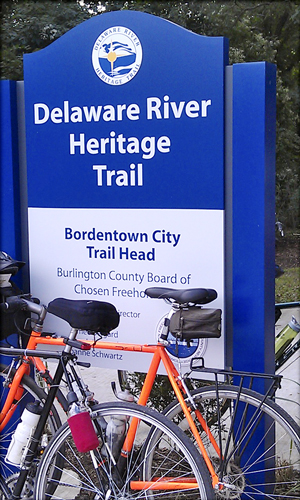 The Delaware River Heritage Trail is envisioned as a 60-mile-long loop highlighting the cultural and natural resources along the upper portion of the scenic Delaware River estuary. The Delaware River is both a precious natural resource and a nationally important cultural landscape. For thousands of years, the Delaware has been a significant source of food and commerce for hunters, traders and settlers along its shores. The river’s history is closely tied to prehistoric settlements, the American Revolution, transportation innovations, important early industries and the area’s first planned communities. The Delaware River Greenway Partnership and a bi-state advisory committee of government and non-profit representatives coordinated initial planning for the trail. The trail will link 24 communities, from Trenton to Palmyra on the New Jersey side and from Morrisville to Philadelphia’s Tacony neighborhood in Pennsylvania. The trail is a component of The Circuit, a 750-mile network of biking and pedestrian trails in the greater Philadelphia region. Today, DRGP focuses on the trail’s interpretation, which includes signage and a virtual trail website. Trail construction will be done by county and municipal government agencies. In New Jersey, Burlington County completed work on the first segment of the trail in 2013. The 2.8 mile segment originates at Bordentown Beach and links portions of Bordentown Township, Fieldsboro Borough and Bordentown City. On the Pennsylvania side, most of the proposed route is co-terminus with the East Coast Greenway and, north of Bristol, with the towpath of the Delaware Canal State Park, part of the Delaware and Lehigh National Heritage Corridor.

The Delaware River Heritage Trail is a member of The Circuit